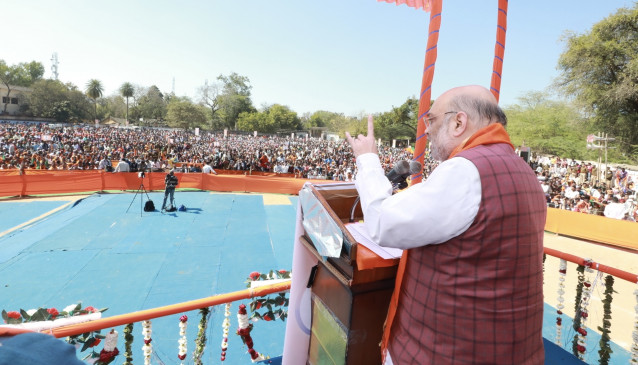 When the SP government was in power, 45 members of Akhilesh’s family held various positions. BJP has provided electricity to 1.41 crore poor households in Uttar Pradesh. Shah scoffed at the SP president and said that Akhilesh Babu was saying that he would provide 200 units of free electricity when his government came. Hey brother Akhilesh, you couldn’t even provide electricity, what are you talking about 200 units?

He said that when the socialist perfume place was raided in Kanpur, so many notes were found that the stage was filled. Should such money be confiscated or not? Akhilesh’s mantra is to collect money and spend holidays abroad. The BJP’s mantra is to raise money and spend it on the welfare of the poor. Union Home Minister Amit Shah has said that the Samajwadi Party and Bahujan Samaj Party have been cleared in the first two rounds of voting.

The Bharatiya Janata Party will get more than 300 seats. “I am bowing to the people of Shikohabad with folded hands,” he said. I bow to Lord Krishna. In this place Jarasandha is defeated. There is a symbol of unity between Jains and Hindus. I salute the brave warrior Kali Charan Gupta Shaheed Hem Singh.

“We have done a lot for the welfare of the poor,” he said. In 2014, Modiji said it was a government of the poor and backward. Modiji sent Yogiji and the schemes reached door to door. Union Home Minister Amit Shah said that Akhilesh Yadav forbade everyone to get vaccinated against the coronavirus and later got the coronavirus vaccine himself. Modiji has saved 130 crore people from the third wave by vaccinating them. During Corona, Modiji gave free rations to 20 million people. Yogiji gave pulses and oil. Five years, give me another chance.

UP farmers do not have to pay electricity for five years. The girl who passes 12 will be given a scooter. Boys and girls will be given laptops. Is there any mafia after the formation of Yogi government? Yogiji did the job of putting everyone in jail. If there is anyone here, Bajrang Bali. Modiji has worked to secure the country. For ten years, the SP BSP supported and led the Congress government. Militants would come from Pakistan and snatch the heads of the soldiers.

The government did nothing. After Pulwama, Modi entered the house with a surgical strike and killed him. The message to the world is that no one can look to the border and the army. Amit Shah said that BJP rules for the poor, backward and helpless. SP-BSP parties rule for their respective castes. SP is good for one nation, BSP is good for another nation.